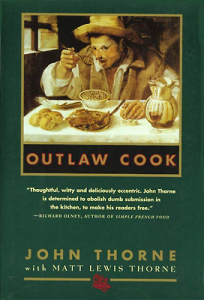 John and Matt Thorne's Outlaw Cook was our Cook the Books Club selection for this month, chosen and hosted by Rachel, The Crispy Cook.  It is a delightful, thought provoking read about food, and continues to be as I poke back and forth among the chapters.  The book is a collection of essays and book reviews, some of which have appeared in magazines or in the authors' own food letter, Simple Cooking, gathered about the general premise that recipes and so-called laws about preparing food are meant to be questioned, tested, played with, broken and re-arranged to suit ourselves.  We can all be outlaw cooks in other words.

There is so much here to inspire, encourage and challenge all of us who love to cook and to eat good food.  I was hard-pressed to narrow down any one thing as my inspired food offering.  Just for example, his chapters on bread, the leavens, the ovens and baking caused me to re-think our failure with an outdoor masonry oven.  Perhaps it was not the fault of the oven's construction??    If he can say:


The bread oven, however, proved to be a teacher out of my worst nightmares.  It made immediate, huge demands on my small understanding.  It not only refused to tolerate mistakes but cruelly punished them with burns and ruined bread.  It expected me to know everything and explained nothing.

Who am I to give up so easily?  Moss is growing in there now. 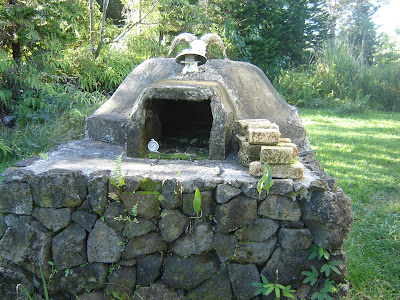 We will be re-firing that pile of stones, of money, perhaps not wasted, once more.  After all, I have my 200+ year old French sourdough starter, still going after all these years. An appointment needs to be made, since this is a project requiring good weather, dough started the night before, the oven fired properly this time, and so on and on.  Today would have been perfect, however as a storm was predicted, I put the leaven in the fridge, and am now looking out at a beautiful day.

For days like this, a Bread Cloche has been ordered, which Thorne discusses as an alternative, second-best to baking in a masonry wood-fired oven.  I am looking forward to that.  As we have a wood-fired sauna,  I am familiar with getting fires going.  Not always a piece of cake, but out in an exposed situation with wind, a challenge.. My grandson was in charge of the last oven firing.  I know, but he likes to set fires, and we decided to put that energy to constructive use.


The treatise on Garlic Soup was enticing, something definitely to give a try.  And there was Meatball Metaphysics, (love that title) with recipes. Also encouraging was the chapter, On Not Being a Good Cook,  since I do not consider myself a good cook.  As the experiments I try are often not wholly successful, it was easy to find myself in total agreement with his comment that, "you don't have to be a good cook, or even aspire to be one, to be an interested cook."  And I am, though my culinary range orbits more frequently around making fruit wines, pickles, preserves, cacao processing - finding the best ways to prepare, and discovering the many uses for what is growing around me.   There was so much in the book that I agree with, as: "this is a sharing and not a performance....There's a lot more to cooking than being good at it."  And:

"For what delights me about cooking is not getting things right but the simple pleasure of getting to know them in the first place.  Today, on my daily visit to market, I came across a cabbage - an ordinary plain green one - but one so small and round and appetizingly demure that I had to immediately seize it up." 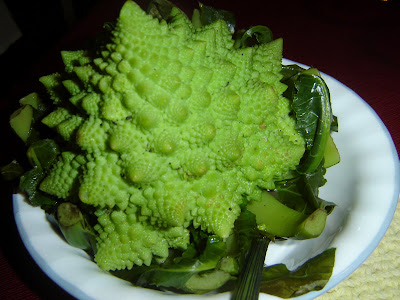 Yes, I can relate to that.  I found this Broccoli Romanesco recently in the market, was considering its beauty and fractals, picked it up in total admiration, just wanting to take it home and find the best way to let it shine. I couldn't stand the thought of cutting that piece of art up, so drizzled it with olive oil, sprinkled on some sea salt and just steamed and served it whole.  As things turned out, that was perfect.

I enjoyed the essay chapter, Acetaria, in which he discusses the food of Italy prior to the coming of the tomato. In the past few years I had wondered about that, sympathizing with mystery writer, Camilleri's Inspector Montalbano as he would grumble about the ubiquitous red sauce, everywhere prevalent now in Italian cooking.  I decided to do without a recipe for our signature dish, to use methods rather, and what was on hand to create in an Italian style (without a tomato).

What I wanted was pasta, cut in the fast and easy fazzoletti shapes (face towels), combined with 2 left-over chicken thighs which had been roasted with lots of garlic, the drippings (after lifting off the fat),some  mushrooms and about 1/2 cup of white wine left from a bottle of my Carambola. 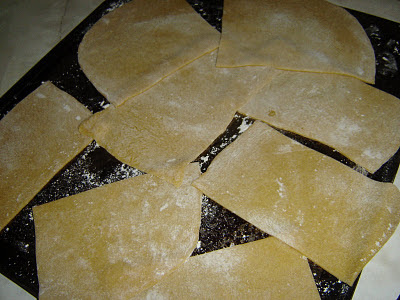 This was an egg pasta, basically 3 smallish eggs to 1 3/4 cups flour, salt and a few teaspoons of olive oil.

While the pasta water came to a boil, I sauteed mushrooms in a bit of that chicken fat, then added in the wine, simmered to reduce it, added minced parsley, thyme, chopped chicken meat and cream.  Finally, the pasta was laid out on my serving dish, ladled with sauce, sprinkled on basil slices and pecorino Romano in three layers.  It wasn't at all neatly done, but there you have it. 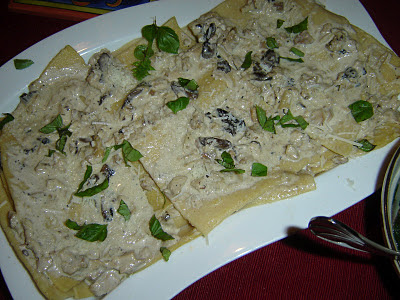 Quite delicious, served with a side of fresh steamed spinach, drizzled with a bit of olive oil and a grating of nutmeg.  This turned out to be even better than expected.  I love it when that happens.  The only thing I would correct, as usual, would be to roll the pasta even thinner.  I think cutting the original ball in half, and doing each portion separately would make that easier.  Altogether this Cook the Books Club selection has been totally worthwhile, informative and fun.  Check the link to see what everyone came up with, as well as the Winner announcement. Hint hint.
Posted by Claudia at 10:44 AM

A glorious post. I enjoyed many of the same quotes from Outlaw Cook. I love the photo of your backyard oven and the fractals of your Romanesco cauliflower. I'm so delighted that you enjoyed this book selection.

I am envious of the bread oven (even if there is moss growing on it). Our goal is to incorporate a pizza oven in our grand patio scheme.

I really enjoyed this post. I have had a hard time finding enough time to digest the book. I am hoping to finish my post today. (Nothing like waiting until the last minute!!!!)

I loved the book and it is so funny, I pulled out the interested cook and the not getting things right quotes too for my post too. Great minds I guess... ;-)

Your outdoor oven is very cool. The pasta dish is making me drool. Wonderful post.
;-)

This book sounds like such an inspiring read! It would make me want to get in the kitchen instantly.

Hi Claudia, that's a very handsome bread oven! If you're interested, I'll send you a photo of mine. One big mistake I made was not putting enough insulation ON TOP of the oven -- the heat just flitted away. I could also have spent more time figuring out the direction of the prevailing wind, which perhaps would have explained why the fire had the irritating habit of going out. So much to learn! Later, located in an urban setting, I volunteered to get up first thing in the morning and go downtown to fire up a wood burning oven at an artisanal bakery (as well as mix up a fresh batch of sourdough!). It was such a difference working with a real French bread oven, although I did manage to burn myself severely before I learned sufficient caution (can send you a photo of that, too).

However, enough about me. Your recipe is well thought out and the series of photographs showing how you made it will, I think, inspire much imitation. As I get older, I'm less hostile to cooked tomato dishes, but my heart still leaps up when I see something like this ... and start to mutter "Damn the tomatoes! Full speed ahead.)

Finally, yes, the way some unknown vegetable can seize hold of you and make you take it home simply because it looks so intriguing. I last did that with some bitter melon, then dithered for a week before working up the nerve to actually cook it. It was so good I rushed back to get more, but it had vanished, and I haven't seen it again.

Thanks for writing so interestingly about my book; a great joy for any author, I think. ~ John

Thank you all, and John I would love any photos of your bread oven. Ours is pretty much set in stone. ha ha. But I did get the cloche yesterday and today bread will be baked in it, which I am looking forward to.

Thanks you, Claudia, for sharing your bread oven story with us. I sometimes dream about having such oven, but I have always thought that it would be a complex project to construct and maintain. I guess I am not single-focused and so I am wary of committing too many resources to one thing. I don't see kefir in your list. I have been playing with the grains you gave me ever since I came back. At some point I hope to stop and sit down to write about the versatility of kefir. Nice job with the pasta!

This is a wonderful post and you picked very profound quotes from the book. I loved your backyard oven and your delicious dish!

What a GREAT post and of course congratulations on your win. The oven looks amazing, I wish I had access to something similar.