Skordalia and Horta - Not Just for Cretans 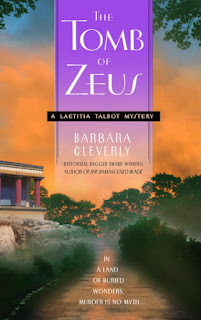 I've just finished reading The Tomb of Zeus, by Barbara Cleverly, author of the terrific Joe Sandilands series.  This novel introduces her new series with protagonist, Laetitia Talbot, archeologist and occasional sleuth. The story takes place on a dig in Crete, where they will be searching for the legendary tomb of Zeus.  Of course a murder takes place and needs to be solved.

Her first night after arriving, Letty is served some local dishes, as her host, an eminent archeologist, is also a proponent of all things Cretan.  Their fare includes horta, and fried fish with Skordalia. His starter, which turns out to be a test of Letty's nerves, is a "chalky white mound of animal tissue folded in tightly curling waves and sitting in the middle of her plate...This culinary delicacy was surrounded by a moat of reddish-brown fluid..."  lamb's brains, just to see how she'd react.

I was not tempted to reproduce that particular dish, but the horta and skordalia piqued my interest.  Skordalia is a sauce (or dip) often served with fried, battered fish.  I wanted to try that.

When I visited Crete several years ago, it was during the off-season, and many restaurants were closed.  Nevertheless,  I do remember enjoying all of my meals. Complementary raki everywhere may have helped.  No one served me lamb's brains. 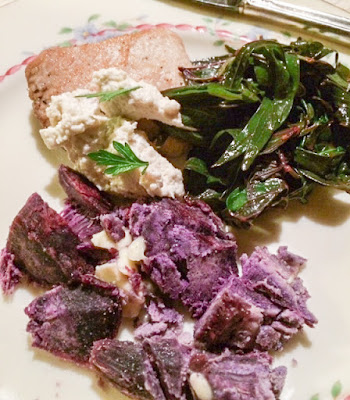 So, inspired by Letty's first Cretan meal, I prepared fried fish with Skordalia and sides of horta, and sweet potatoes from the garden, recipes from my Greek and Cretan cookbooks.  Overall everything turned out well, though the experience was a good example of preparedness gone wrong. When cooking, I need to take the occasional deep breath, slow down and enjoy the process more.  If we run a bit late, so be it. 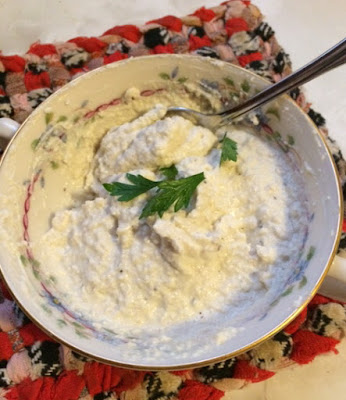 I had the batter, the flour mixture, the fish lined up.  The Skordalia made ahead of time.  The horta done and keeping warm.  I fried up the fish.  Unfortunately neglecting to first dip it into the batter.  Still good though.  But after preparing something you feel like thumping yourself on the head for not using it. 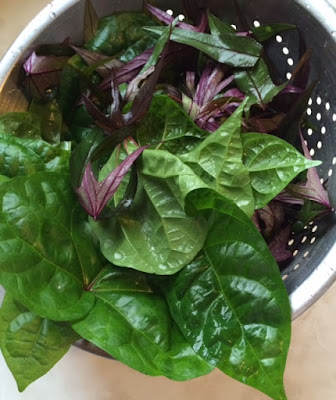 Turns out "horta" is actually a dish I make all the time.  Cooked greens, steamed or boiled, dressed with olive oil and vinegar or lemon.  I used sweet potato greens and a perennial spinach from my garden. Don't you love the contrasting colors?

There are a number of recipes for skordalia online, which I didn't look at until later, just using the one in my cookbook.  Some thicken with mashed potatoes, some with broad beans, bread crusts, and or ground almonds.  Mine called for ground almonds and a bit of bread, but next time I'd like to try it with potatoes. 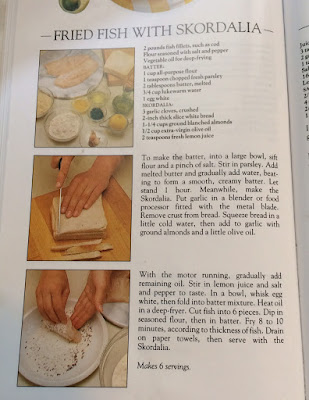 From The Book of Greek Cooking by Lesley Mackley

This post will be linked to Simona's current Novel Food event and to Beth Fish Reads for her Weekend Cooking.  Check out some good books and food at both sites, and link up with your own inspiration if you'd like.
Posted by Claudia at 2:06 PM

Wow, learned a lot from your post. Never heard of any of these dishes, though I did visit Crete years ago. I also happened to be there during the off season and didn't realize so many restaurants would be closed. My husband has eaten sheep's brains in Algeria. He's much more adventurous than I am when it comes to strange foods . . .

Argh, I've done similar things of forgetting a sauce or glaze or icing. Oh well. The leaves you used are indeed pretty.

Though I've read about Cretan food I have never had it, though I think I have eaten versions of those dishes in regular Greek restaurants. Travel exposes one to really interesting food experiences, doesn't it?

I have never been to Greece but I do much armchair travel, love the recipe ideas I get.

I love the colors on your greens, they are so vibrant.

I don't know this author and will check it out. Fried brains is also not on my list of favorite dishes ;) On the other hand, sweet potato greens is something I'd like to taste. And your skordalia. Thank you so much for contributing to Novel Food!