Spinach and Mushroom Quiche Served up With Mystery 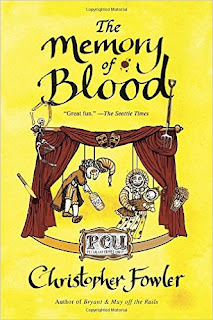 I've just finished another of the marvelous Peculiar Crimes Unit novels by Christopher Fowler, The Memory of Blood.  Books like this one are what keep me reading!  Wit, comic relief, craziness, wit, entertaining, outstanding characters, mysteries, wit, you get the idea.  Very well written and yes, witty, original writing.  Plus, the murderer gets caught.  Not too long ago I reviewed another of their adventures, The Water Room.

Arthur Bryant and John May, a partnership of elderly detectives, along with their quirky, team of investigators, form what is known as the Peculiar Crimes Unit, an off-shoot of the Metropolitan Police, of which the affix 'peculiar' originally was meant in the sense of 'particular', in order to handle politically sensitive cases, or those with the possibility of causing panics or general public malaise.

Here, the cast party for a shocking new play ends with an even more shocking murder.  As the daughter of a prominent government official is involved, the case gets referred to the PCU.

The book begins with a prologue of the close-of-play party, (theater folks do enjoy parties) which is completed at the very end, revealing the solve.  And, since food is involved, I'll share with you the opening paragraph:


"Arthur Bryant stood there pretending not to shiver.  He was tightly wrapped in a 1951 Festival of Britain scarf, with a Bloody Mary in one hand and a ketchup-crusted cocktail sausage in the other.  Above his head, a withered yellow corpse hung inside a rusting gibbet iron.
'Well,' he said, 'this is nice, isn't it?'"


I like this bit as well, which gives you an idea of Bryant's unique persona:


"Arthur Bryant couldn't handle cases that required an understanding of human relationships, and would take off into lunatic new directions if left unchecked.  Someone had to keep an eye on him.
May peered around the door of his partner's office and watched Bryant knocking the contents of his pipe into the brain-pan of the Tibetan skull on his desk.  Half of the bookcase had been emptied, and two immense stacks towered on either side of the desk, framing the old man with playscripts, manuals, comics, art books, histories, encyclopedias, miscellanies and a number of surprisingly sleazy pulp thrillers.
'I knew it,' May said with a sigh,  'You've been thinking again.'
Bryant widened his watery blue eyes in surprise.  'Ah, there you are,' he said.  'Now that you've finished holding your little chats, (referring to the suspect interviews) we can talk.  Do come in, and shut the door behind you.'" 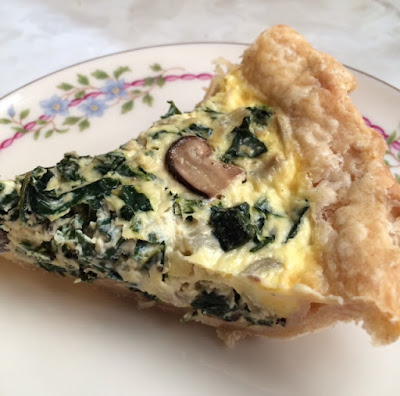 Early in the novel, the partners meet at a tea shop that had just opened downstairs from the Unit, The Ladykillers Cafe.  On offer were: Battenburg cake, quiche Lorraine, Bath and Banbury buns under glass.  So, having just made a Pacific spinach and mushroom quiche, I thought to serve it up here.  Based on an Elizabeth David recipe, it called for heavy cream and egg yolks.  Quite good, though next time, I think I'll lighten it up a bit by using at least half kefir and maybe whole eggs. 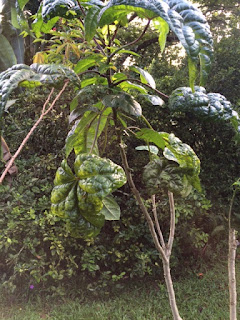 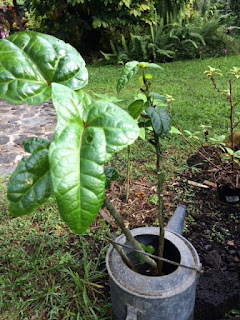 Pacific spinach is a perennial tropical green I've been growing for awhile, without knowing exactly what it was.  So, a Google search just revealed the true name for what I'd been mistakenly referring to as Malabar spinach or New Zealand spinach, or??  Doesn't look like either one of those. With our survival project going on, I'm trying to propagate more food perennials happy in the climate conditions we have going.  Since this Pacific spinach is very nutritious, I've got those (above) cuttings to plant some more.  One of the beauties of tropical perennials is that they keep on going (duh) no dying back in winter, re-sowing and waiting again and again for your spinach or what have you. 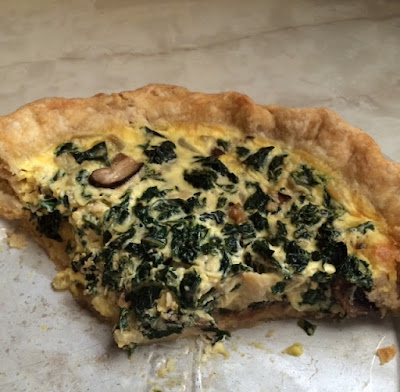 Line an 8-inch pie tin with pastry (your own favorite or a prepared crust).  Wash, then remove any thick stems from the spinach.  Drop for a moment into boiling salted water, to which the vinegar has been added, just enough to wilt.  Remove and let cool before squeezing out excess water, and chopping up.

Melt the butter and saute the shallots til soft, then add the mushrooms and saute briefly.  Add in the spinach and ham or prosciutto and stir.  Spread mixture over the pie crust.

Beat eggs  and cream; season with nutmeg, salt and pepper; then pour over the spinach mushroom mixture. 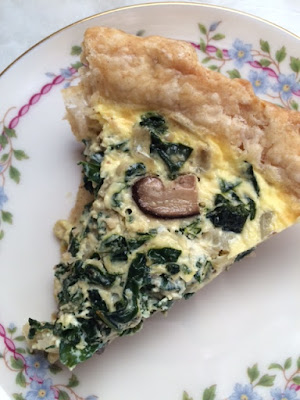 We ate most before I remembered to take a picture of the whole pie.  This post will be shared over at Beth Fish Reads for her Weekend Cooking event.  You can visit and also add your own link if you like, on what you're eating or cooking up.

I'll freely admit her that my favourite quiche recipe is made with Bisquick which forms its own crust.

Jackie, I like that version as well, called "Impossible Pie" and make it with a homemade bisquick:)

What an interesting and amusing mystery that must be! I love the old meaning of "peculiar" -- I've encountered it in other contexts, equally strange to the modern ear. Your quotes are so well-chosen.

This is a series that's been on my TBR for quite some time. It sounds amusing and well done. I love a good quiche but I'm the only one who does so I only eat it at restaurants. I do not need to eat a whole quiche all by myself!

I like the sound of that mystery and that quiche. I have grown New Zealand spinach and "regular" spinach -- both are good.

I like books with lots of wit! I love spinach, but never thought of growing my own.

How timely! I have been craving just this kind of quiche for a while now!

I have never grown spinach before but I want to. Best laid plans, me and gardening, Lol. You have me interested in this series of books, I love the quotes you get from them.

I've not yet read a Christopher Fowler book, but they look very tempting in our Mystery section at the Book Cellar. And you quiche looks so tasty, I pinned this one.

I will have to check out this series--it sounds like fun! Your quiche looks delicious. I love a good quiche. ;-)