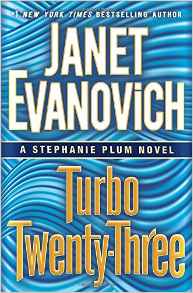 Stephanie Plum, in this latest novel, Turbo Twenty-Three, by Janet Evanovich, is not eating any better than usual.  She is in fact, the Queen of Fast Foods, an often inept bounty hunter for her cousin Vinnie in Trenton, N.J., and occasional undercover for a security company.  When she does eat good it's her mother's or boyfriend's mother's cooking, or sometimes tasty neighborhood deli take-out, like cannoli and a Jersey hot dog.

Evanovich's Stephanie Plum novels are pretty much all hysterically funny.  The plots, the scrapes she gets into, her goofy sidekick, friends,  family members, co-workers, hot boyfriends, and other assorted characters are so over-the-top, I just laugh my way through the books.  This one is no exception.  Love it, though perhaps you may need a rude, crude and sexy warning.  Keep in mind though that laughter is good medicine. :)

Turbo Twenty-Three involves murder at the local ice cream plant, requiring Stephanie to go undercover on the factory line, on the loading dock and in an ice cream truck.  Among other things.  There is a comment at one point, by her partner: "It's sad to see a broken-down ice cream truck full of bullet holes," Lula said, "What's this country coming to?"  And, on top of all the humor, they actually catch bad guys and help solve mysteries.

One of Stephanie and Lula's favorite stops on the job is their local Cluck-in-a-Bucket, where Plum might get a Hot and Crunchy Clucky Meal and Lula a Supersized Bucket of Cluck with the Works, which includes mashed potatoes and gravy, biscuits, coleslaw, fried okra and an apple turnover.  After ordering, Lula remarked, looking back up at the menu, "I might need some ice cream as a palate cleanser." 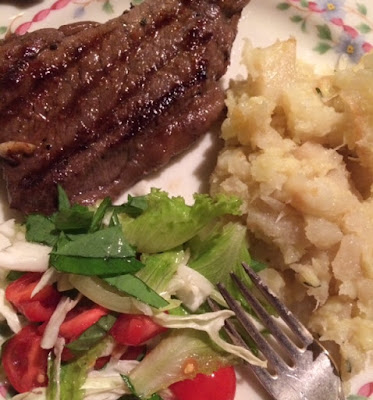 Some nights Stephanie's fiance, Joe, will do BBQ.  So, in honor of the grill, I've served up some grilled steak and mash, which I mentioned in an earlier post.  I love that mixed mash and am adding some cassava root to the parsnips, celery root and sweet potato for this batch.  So, despite the post title, this is not bad food.  That is in the book. 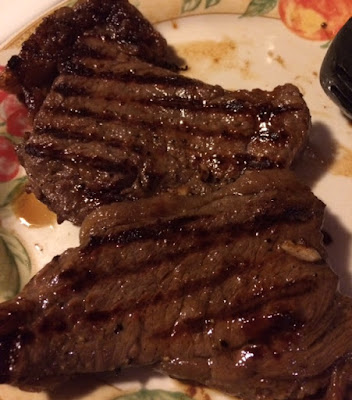 You all know how to grill steaks, nothing new here.  I used only a bit of marinade on them, a few tablespoons of shoyu, garlic, a dash of vinegar and a tablespoon of olive oil.

Will share with Beth Fish Reads for her Weekend Cooking event and with the Foodies Read Challenge.

Mashed cassava! Yum. Thanks for sharing this, Claudia. I don't think I've ever read any of this series. I will.

I haven't read a Stephanie Plum since book 3 or 4. It's true, I don't remember Stephanie ever cooking.

Your review is wonderful!

I have yet to read a Stephanie Plum book but maybe one of these days! ;-) I love the idea of the mixed mash with cassava. I made a stew with cassava a couple of years ago but have not cooked with it since then.

This sounds like a really fun series! Mashed cassava would be amazing alongside grilled steak. Thank you so much for sharing. :)

I have most of the books in this series but haven't read any of them. Once I get moved I may start reading it.

I also love mashed roots so you've given me an idea to add celery root to it. I often do sweet and white potato along with carrots and parsnips.

I have never read this series and didn't know it had comedic elements. I guess I thought she was a more hard boiled crime writer, sounds intriguing. I haven't had mashed cassava but plan to now.

Grandma and Lula are my favorite characters in the Stephanie Plum books. They crack me up!

I'm listening to number 22 right now. I'm surprised they aren't all 900 lbs from how much junk they eat.

omg those steaks look SO GOOD!!! That's how we eat stake where I grew up with casava :) a nice cilantro sauce on top