A Death in Vienna - Pastry Disaster 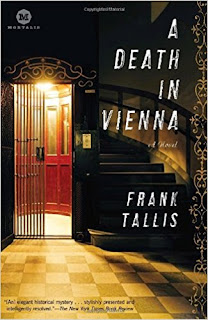 I just finished A Death in Vienna by Frank Tallis, the debut novel for a new series, and was quite impressed with his unique combination of the history of psychology and early 20th century Vienna, romance and mystery.  This is the era of Freud, Klimt and Mahler. There is a new wave of artistic as well as scientific innovation, contending with old school thought, the reigning, male dominated conservatism which categorized abused and traumatized women as "hysterics" and often had them committed to hospitals for the mentally ill.  It was also an age in which antisemitic feeling was gaining ground.

This then is the setting for a murder, and the fledgling psychologist hero, Max Liebermann, assists his police detective friend in finding the totally unusual and unexpected solution.

A beautiful medium is killed in mysterious circumstances – a murder that couldn’t have been committed by anyone alive, from all the available evidence.  The supernatural is invoked, but of course, appearances can be deceiving.  A fascinating, delightful read and highly recommended.


It is the height of cafe society in elegant Vienna, with pastries galore to accompany the various fancy coffees.  So, you know I had to make some Viennese treats.  I settled on a delectable pastry called Chremeshnitten, one of the many varieties mentioned in the novel.  Puff pastry on the bottom, a thick layer of vanilla custard, then whipped cream and topped off with a chocolate glaze.  Sounded pretty good to me.  I sampled the vanilla flavored custard when layering in and it was delicious. 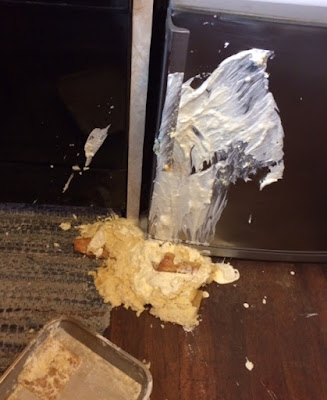 Oh boo hoo ....This is where the disaster comes in.  Whilst taking the pan out of the fridge to add on the final chocolate layer, it fell.  Yes, all over the floor and side of the refrigerator.   I took a picture so you could share the angst.  On top of which I was expecting friends over for a meeting.  The mess needed to be cleaned up, and alternative refreshments arranged.

The good news is - the chocolate was saved!  So glad not to be cleaning up that as well.  There was more than enough waste. Luckily, I had some banana muffins that could be topped with it.  And there were chips and fresh rambutans.  No one was discombobulated.  Except me. 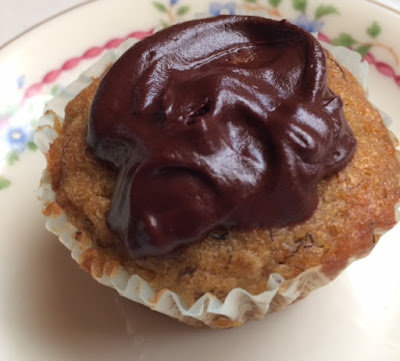 These are my very favorite banana muffins, an old recipe, originally from the Queen's Surf Restaurant, which I  posted about in the distant past. That's not to say I was thrilled or anything. I had been looking forward to a glorious Viennese pastry, which I'll probably never get around to making again.  Well, maybe a modified/cut down version.  There was too much of it.. (She says after cleaning up.)  Anyway, you might find it easier to make the muffins, which I'm sure they would also enjoy in Vienna.

Cream sugar and softened butter, add bananas and well beaten eggs. Sift dry ingredients together three times and blend with batter. Don't over-mix.  Pour into greased muffin pan or use liners, and bake at 350F for 25-30 minutes. Cool on rack and enjoy! 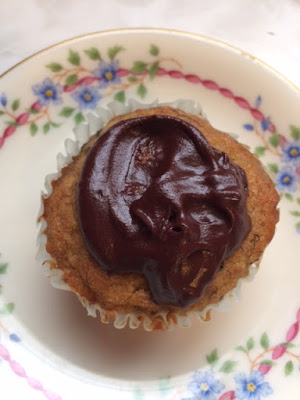 If you're interested in doing the chocolate glaze, it's very easy.  Just melt 150g dark chocolate (I used Sharffenberger bittersweet) in a double boiler, and add in 7 g. butter and 3 tablespoons milk.  Stir until you have a nice shiny mixture.

That is the saddest picture ever.

And I couldn't break down and have a crying fit. There was too much work to be done.

Oh my.....I could just feel that angst in the pit of my stomach when I saw that gorgeous dessert lying on the ground and smeared on the refrigerator. Glad that you had the muffins on hand to offer up instead and also that you had time for cleanup before your guests arrived.

So sad about the pastry ... but then there's the whole series of Max Liebermann mysteries that you can continue with! Goodreads lists 6 or 7 of them. I've only read _A Death in Vienna_ which is the first one from 2005. But eventually I'll get back to them.

Oh dear. That's real life for you. Have a great week. Cheers from Carole's Chatter

Oh NOOOOOO! And *of course* you had company coming. Glad you saved the day.

I love mystery books, and always have one on the go.So glad the chocolate got saved :) I'm visiting from Weekend Cooking.

Thank you for telling us about this new series: I am always eager to expand my horizon when it comes to mystery novels. I admire your approach to the disaster (take a photo, share and move on) and your strategy for dealing with the impending arrival of guests: great plan B and good that you saved the chocolate. I can imagine your reluctance to make that pastry again. Thank you for contributing to Novel Food!

So sorry about the disaster. :( What you ended up with looks delicious, however!